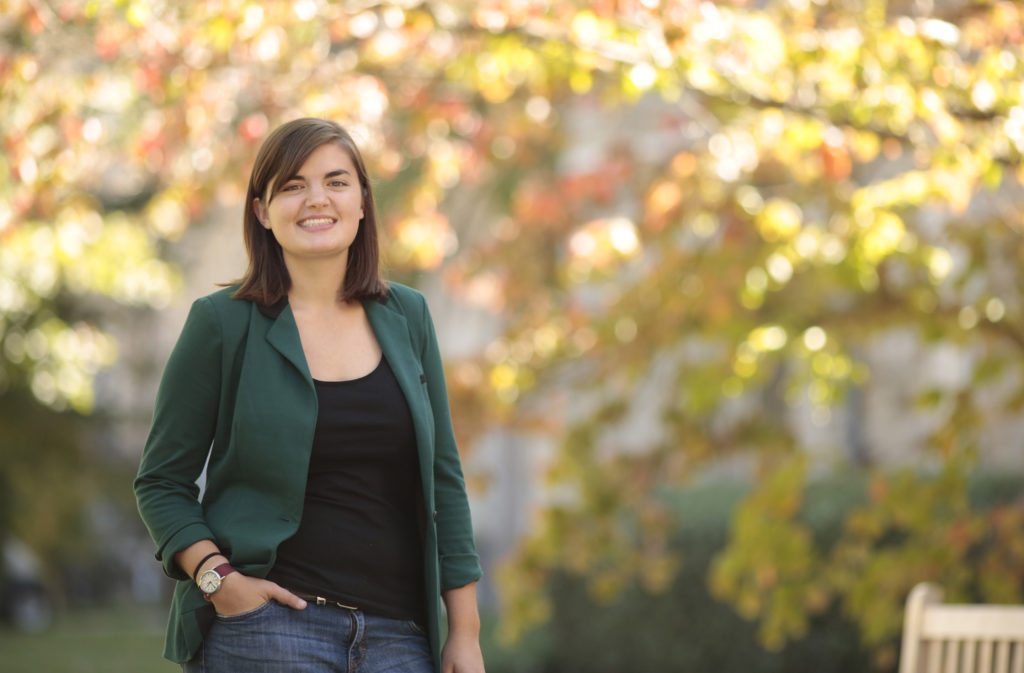 A Geek about Geeks: An International Exploration of Geek Identity and Culture

Lara Johnson, a senior art major from Franklin, TN, has been named a Watson Fellow, a prestigious designation that includes a stipend to be used for travel and study abroad for 2016-2017. Johnson is one of only 40 graduating college seniors nationwide awarded the fellowship.  She plans to visit Japan, Brazil, India, and Poland while completing her project “A Geek About Geeks: An International Exploration of Geek Identity and Culture.”

“By attending conventions and meeting with clubs, I will look at geek culture in Japan, Brazil, India, and Poland, exploring the conflict between individual and community identity in a personal and global context,” says Johnson about her plans. “How do people around the world, who are told that their passions are weird, who are forced to love those things in solitude, come together as a community? How does my identity and experience fit into this larger geek community? While we are spread across the globe and live in very different contexts, these questions and problems tie geeks together. By seeing how others address these questions, I hope to discover answers of my own.”

A graduate of Franklin High School and a student filmmaker, Johnson received the Bettye M. Pedersen Scholarship at Rhodes. In 2014, while participating in the Rhodes Institute for Regional Studies, she researched geek culture and organizations. As a result, she produced the documentary “Geekland: Fan Culture in Memphis,” which was featured at the Memphis Comic and Fantasy Convention and the 2014 Indie Memphis Film Festival. In addition, a trailer for the film was shown on the Jumbotron at a Memphis Redbirds baseball game with around 2,000 people in attendance.

The next year, two of Johnson’s works—“Dancing with Lara,” an experimental short showing off Johnson’s dance moves, and “Glitching,” a film written with Rhodes alumna Emily Heine about an out of control house party—were shown at the 2015 Indie Memphis Film Festival. Also, Johnson’s internet video “The Secret Lives of Squirrels” was featured on the “Right This Minute” television show and currently has 11,000 views on YouTube.

In 2015, Johnson published “10 Tips to Help Geeks Adjust to College Life” online in the student section of USA Today. “Get out there and find people who can recognize an awesome person when they see one and forget the rest,” she wrote. “You’ve got enough stuff to stress about in college, worrying about what others think should not be part of it.”

Johnson’s other works include a film produced for the Orpheum Theatre in Memphis and the film “One Today” featuring the poem Richard Blanco wrote and read at President Obama’s second inauguration. “One Today” also was shown at IndieMemphis.

Johnson has been an intern for the Running Pony video production company in Memphis, and currently she is a student media coordinator for Rhodes’ Barret Library. In addition, she is on academic scholarship as a member of the Choctaw Nation of Oklahoma, president of Rhodes improv troupe Contents Under Pressure, and a member of Omicron Delta Kappa honor society for outstanding scholarship and leadership.

As part of a grant program with Arts Tennessee and in partnership with the Memphis Comic and Fantasy Convention, Johnson also visits different schools in the Mid-South, teaching children about basic filming skills and cumulating in them making a two-minute fantasy short film.

After completing the Watson Fellowship, Johnson says, “I plan to continue my art practice, which is a hybrid of narrative film-experimental video and improv, while also continuing to work with the geek communities of whatever city I end up in. Does that mean graduate school, the workforce, or something else? I don’t know. I guess I’ll use the Watson to figure that out.”

Established in 1968, the Thomas J. Watson Fellowship provides for one year of independent study and travel outside the United States. Since 2002, Rhodes has had 10 Watson Fellows.

I am looking at geek culture in Japan, India, and Poland by attending conventions and meeting with clubs while I explore the conflict between individual and community identity in a personal and global context. How do people who are told that their passions are weird and are forced to love those things in solitude, come together as a community? Across the globe, this question ties geeks together. By seeing how others address this question I hope to discover answers of my own.